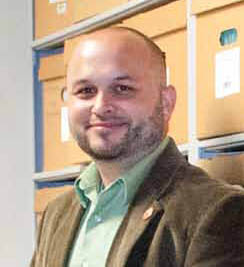 Despite his interest in the subject, Matt Francis didn't really know what he could do with a history degree when he started college at Bluffton in 1998.

He had visited museums as a boy and liked history classes in school. When he decided to attend Bluffton—a result of its size, "community feel" and financial aid, Francis says—and was considering a history major, he sat in on a class, which he enjoyed, too.

As a first-year student on campus, though, he didn't declare a major and didn't take any history courses. The reason, he explains, is because he thought the only career possibility with a history degree was teaching, which didn't appeal to him. So he looked for something he believed would be "more practical," he recalls, but "nothing grabbed my interest" like history.

Returning to his first choice, Francis began talking to history faculty members about other career options, convincing him to pursue the major. Fifteen years later, he's glad he did—an interest in archival work that took hold in graduate school has led him to positions at three universities, including Penn State, where he became archivist for collection management in summer 2013.

The State College, Pa., resident became intrigued by the world of archives in classes as a first-semester graduate student in public history at Wright State University. He entered the master's degree program in 2006 with a museum studies focus but graduated two years later with a concentration in archival management.

He was attracted to archives, he says, by the chance to be at the forefront of historical research, collecting materials that are "foundations of history," preserving them and making them accessible to scholars and the public.

Soon after earning his master's degree, Francis became a processing archivist at the University of Wyoming's American Heritage Center. One of the largest academic archives in the United States, the center holds state, regional and national collections, as well as materials related to such subjects as popular culture—the papers of comic book magnate Stan Lee, for example—and newspapers, he notes. Also among the contributors to the center is journalist Hugh Downs, who attended Bluffton.

The main part of his job at Wyoming, says Francis, was to work through a donation—whether in five boxes or 100— and arrange the contents so they made sense. That included creation of a "finding aid," a readable map for the benefit of the public and researchers.

In 2011, he moved on to Potsdam, N.Y., as college archivist at the city's State University of New York campus. He expected a longer stay there, but during that year decided to pursue his current position, which, in Penn State's Special Collections Library, combines elements of what he had liked at both Wyoming and Potsdam.

"It is a pretty big job, and that's what intrigued me about it," says Francis, who oversees all operations concerning the transfer
of materials to the archives, and then their arrangement and description for public accessibility. Collections include labor, literary and Pennsylvania political papers, plus materials about Mennonite and Amish history. And at Penn State, he
adds, he can take advantage of resources that could make the university a leader in archival accessibility.

Through his program at Bluffton—where professors Perry Bush and James Satterwhite challenged and inspired him, he says—Francis found that study of history, with its emphasis on reading, writing and research, "makes you a well-rounded candidate for many careers."

And archival work is "a very robust career path for those interested in history," says the Kettering (Ohio) Alter High School graduate, who is married to Bluffton alumna Kristen Stager '03.

His earlier "worries and ignorance" now aside, he says, "a history degree can open up doors for you."