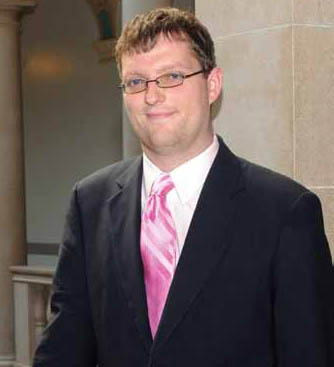 Jacob Kovach knew in sixth grade that he wanted to go to law school someday. However, no one in his family had gone to college. And as the oldest of three children of a single mother, he realized he would need good grades to earn scholarship money to help pay for it.

Fortunately, two high school teachers and a particularly influential admissions counselor set Kovach's course for a history major at Bluffton, where faculty helped guide him toward his long-held goal. A 2007 Bluffton alumnus, he graduated from Ohio Northern University's Pettit College of Law in 2010, passed the bar exam on his first attempt later that year and is now a practicing attorney in his native Preble County, Ohio.

Law school was still far in an uncertain future when Kovach, as a freshman at National Trail High School, was already admittedly worried about just getting into an undergraduate program. That's when his algebra teacher, Bluffton graduate Mike Harrison, encouraged him to talk to Audwin Jones, then a Bluffton admissions counselor whose recruiting territory included Preble County.

Kovach remembers an "eye-opening" first meeting with Jones, who talked about Bluffton and its values and told the teenager to keep in touch. "I called him all the time," says Kovach, with questions such as what high school classes he should take to best prepare for college. And Jones always returned his calls, he adds.

While he was also in contact with representatives of other universities at the time, "I knew by the end of my sophomore year that I was going to Bluffton because of my relationship with Audwin Jones," Kovach recalls.

In the meantime, his interest in history was fueled by another high school teacher, Mark Hoffman, whose methods included pointing out historical inaccuracies in films he showed in class. "I just found that fascinating," says Kovach, noting that he appreciated Hoffman's approach to history as more than names and dates, but also something "living and breathing"
that could be applied to the present and future.

He found a similar approach, at a higher level, in Dr. Perry Bush's teaching at Bluffton. Kovach credits the university's history program with helping prepare him for law school by emphasizing writing and analytical thinking, and Bush, more specifically, for stressing conciseness in writing.

"When I went to law school, one of the things I found most amazing was peers who weren't prepared for the writing aspect," he says. At Bluffton, he had written drafts of papers that Bush proofread and critiqued. His feedback "was invaluable because it made me a better writer," Kovach maintains. "He taught me how to pick out what was important."

Kovach also notes the influence of former faculty member Daniel Wessner, a Stanford Law School graduate whom he could question about that experience, and Dr. James Satterwhite, now professor emeritus of history and political science. The attorney says he still applies Satterwhite's recurring question about class material—"What does this mean?"—to court rulings that he must interpret to aid his clients.

Those clients are primarily in juvenile and probate cases, explains Kovach, who worked as a clerk for a Dayton lawyer from August 2010 until January 2013, when he opened his practice. Working from his current home in Eldorado, Ohio, he represents clients in Montgomery, as well as Preble, County.

Kovach describes himself as "a voice for the child"—and sometimes the mentally ill—in the courtroom. "The law," he says, "should protect those who can't protect themselves."