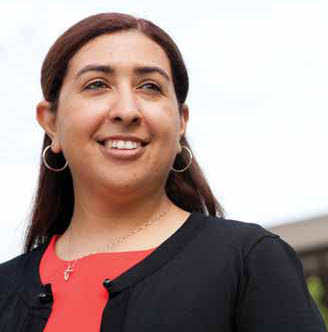 There are people who decide on a career at a young age—and then there's Dr. Norma Flores.

"When I was 6 years old, I told my parents I wanted to teach history," says the 2003 alumna, who did it while earning her doctoral degree and continues to do so as a first-year visiting instructor at Grand Valley State University in Allendale, Mich.

The Toledo, Ohio, native credits her attraction to history to her father, a Marine veteran of the Vietnam War and an avid reader about warfare, especially World War II. His interest "really rubbed off on me," Flores says, and it was fanned by a junior high school project about the Holocaust.

Looking for a small, private college as a high school student, she heard about Bluffton and, during an overnight visit, "just fell in love with the campus," she remembers. "I just felt like this was where I was supposed to be for the next four years."

During those years, "Bluffton solidified my understanding of history," she says, noting that her major opened her eyes to different branches of the field. Working with Drs. James Satterwhite, now a professor emeritus, and Perry Bush "gave me a balance in American and European history," Flores explains, and she took world history and human rights classes taught by then-faculty member Daniel Wessner.

Seeing her instructors bring their passion for their profession, including research, into the classroom reinforced her desire to do the same thing, she recalls. They asked tough questions to push students "to take a stand and make you understand why you believe what you do," she adds, but were never condescending and always supportive. Collectively, "that really gave me a foundation to stand upon," she says.

Her experience was also a thread that has continued to run through the decade since her graduation.

Returning from a spring semester spent at the University of Oxford, England, as a junior, Flores decided to do a senior honors project. The subject of that project—"The White Rose," a student resistance group at the University of Munich during World War II—later became part of her master's thesis, which explored what the British knew about German resistance to the Nazis at the time.

Her previous work, at Bluffton and Toledo, had sparked questions about post-World War I Germany, where Hitler and Nazism rose to prominence. Study of that era, including 1919 uprisings by Communist groups in Germany as well as the United States, led to a doctoral dissertation about the rise of the national security state from the French Revolution to 1919.

Flores completed her Ph.D. in 2012 with minors in Nazi family policy, world history, early America and Native Americans. Her interest in the latter two areas had been piqued in part by work she did as a Toledo Metroparks intern focused on the Battle of Fallen Timbers in 1794, and as a volunteer historical interpreter at Fort Meigs, a War of 1812 landmark in Perrysburg, Ohio.

During her doctoral program, she also taught classes at Bowling Green and, "off and on," as an adjunct instructor at Lourdes University in Sylvania. After two years as an adjunct at Toledo as well, she was happy to receive a three-year contract as a visiting instructor at Grand Valley, beginning this fall.

Recent "pushback" against the humanities aside, Flores says she believes history is still among the most important disciplines that students can study. Through that study, she explains, they learn critical thinking and analytical reading skills that help provide "a very solid foundation" for any career. And with a history degree, she adds, "you can do anything."