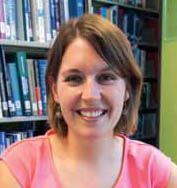 A love of history has led Erin Miller Milanese to two others she didn't know she had.

She grew up with "a passion" for history and a father, Marcus Miller, who still teaches it at Iowa Mennonite School, outside Kalona. At Bluffton, she declared her major in the subject after taking an introductory course during fall semester of
her sophomore year.

"I was never really sure" where a history degree would lead, Milanese admits. But she didn't worry, she adds, because she was "getting a good, solid liberal arts education that would prepare me for whatever I decided to do."

She listened to a piece of advice from her father, too. "My dad always told me to keep my options open, and that history was great background for anything," she says. He also helped illuminate what he meant, notifying her about an open job in Goshen (Ind.) College's Mennonite Historical Library after she had moved to Goshen following her Bluffton graduation in 2004.

That job became the first step toward a master's degree in library science and a realization in graduate school that she had a knack for educational technology. Milanese now combines those two interests in her position as educational and emerging technologies librarian at Goshen.

Encouraged by her father, she applied for the Mennonite library job because it entailed both history and, more specifically,
Mennonite history, on which she had done a project at Bluffton. The Wellman, Iowa, native had planned to live in Goshen only a few months before entering graduate school but, once she started at the library, ended up working there for four years.

"I loved that job so much," says Milanese, who had no related experience but found she liked library work—including helping people with genealogy research—as much as history. "That changed the trajectory of my last 10 years."

Two years into the job, she decided to pursue the master's degree in library science, which she completed in 2010 at Indiana University-Purdue University Indianapolis. Before returning to Goshen in May 2012, Milanese spent nearly two years as librarian at the Lafayette, Ind., campus of Harrison College, a for-profit, career college with 13 campuses in Indiana and Columbus, Ohio.

At Harrison, she began to apply her newly found aptitude and interest in educational technology, working on  faculty  development with such technology as video tools and a learning management system.

"I enjoy learning new technologies and knowing what's new and cutting edge," Milanese says. "I enjoy taking that information and thinking about how it can be used in the classroom."

She continues to work on faculty development at Goshen, where she was rehired last year as a part-time sciences librarian with limited time devoted to technology. But the college was also seeking help with development of online courses, which have become part of her duties in her new, full-time position. She appreciates the change, she says, because educational technology is "one of those things I never realized I had a passion for until I started doing it."

She had seen a similar ardor, for history, in Dr. Perry Bush's teaching when she took his introductory class as a  sophomore,  Milanese says. And she credits Bush and Drs. James Satterwhite and Daniel Wessner, his history department colleagues at the time, for instilling critical-thinking and organizational skills that have served her well in various settings since.

"I haven't found that history limited my options," as seemingly more specialized majors might, she says. "I found it made them more plentiful."